The extraordinary and pinnacle of all sporting events have ended. The competition was fierce and intense. The Colosseum was filled with enthusiastic spectators rooting for their team.
Was it football(American soccer), baseball, or even rugby? No, it was the altador cup. Where all teams from lands of Neopia gathered together to compete in four events for the coveted Altador Cup trophy. What did you get other than an elusive trophy prize for the winning team? You got points for virtual items in the prize shop.

I myself rooted for Virtupets. We went from second last year to near dead last this year. In the beginning, we were edging in second place during the first round but lost our momentum and ended up near dead last. Despite this, it was another great playing year.

Second-year for all-star and another year for wasting time playing a virtual game. The motivation of rooting for my team was defined by going for the elusive rank of double all-star.

This event consisted of four games which I participated in:

The game of football(soccer) is played with a rolled-up petpet called a Yooyu instead of a soccer ball.

You try and weave around your opponents to get the yooyuball in the other opposing goal.
Yet the uncertainty of different Yooyus makes it tougher to score because of the wide range of motion of the balls.

Normal Yoyou: It follows a standard straight-line trajectory on the direction it is thrown.

Clockwork Yooyu: It’s a wind-up robot that travels in the direction thrown but explodes after 7-10 seconds.

Darigan Yooyu: This youyu is unpredictable because it travels in all random directions.

Faerie Yooyu: This youyu travels in a slight curvature depending on the direction thrown at a moderate speed.

Fire Yooyu: It’s like the normal standard youyu ball following a straight-line trajectory on the direction it is thrown. Except it travels at a faster speed and only can be held for ~5 seconds.

Muntant Yooyu: Another unpredictable youyu ball mimicking the patterns of the other youyus each time it is thrown.

Snow Yooyu:  The snow youyu travels at a very slow distance in the direction it is thrown.

Get your cheer and chant ready for your team!

In the bleachers is a legion of overenthusiastic and crazed supporters doing a cheer and chant for there favorite team. You control a crazed Techo by bashing two keys trying to get the sound meter up. The faster you bash the higher sound meter goes up, propelling your team to do better. However, you must send at least a score of 2700 otherwise you have failed to cheer on your team.

The thirsty fans need a slushie to keep themselves hydrated for the ongoing excitement of youuball. 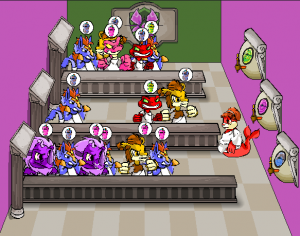 The scoring process is as follows:

Its Yooyu shooting practice time! A time to prepare yourself for the demands of the yooyuball game by having to score five Yooyus in the goal in less than 60 seconds. You have to try and get your rhythm down for the goalkeeper’s objective is to block the incoming youyu preventing you from succeeding.

All the teams competed for the elusive trophy for the winning team. The competitiveness, intensity, and team banter encouraged a drive to win.  Yet the comradery, friendliness, and teamwork boosted your motivation to play your heart out for your team. This resulted in a drive to rank up and boost up the ranking of your team.

As you can see this was an intense exciting game. It was a year of triumphs and defeats for teams. The favorites fell and the underrated teams rose up to place in the top five.

Questions:
Does anyone else play altador cup or even play Neopets?
Would you consider playing this event next summer?

3 thoughts on “The extraordinary and pinnacle of sporting events (Altador cup) has ended in 2020!”